The Lord is good and His hand great, He has been my shield and my buckler, He has made me glad,  His love and His mercy have sustained me; there is no place like in His presence, for there is fullness of joy. I am standing on His promises.

I was listening to a teaching yesterday by David Wilkerson, on the prodigal son and he shares that the son’s concept of the father being a hard father, and he did not think that his father would have him back as a son; he was feeling alienated, yet the alienation was self afflicting, and when he came back home his father received him, and he was to go and enter in to eat and rejoice and dance. Pastor Wilkerson said that many Christians never enter in that fullness of feeling accepted fully by the Father all because of unbelief. They never enter the rest. They feel like as if there’s one more thing that they need to do so as to feel received and accepted, yet the door is open through Jesus Christ, and it is by grace that we are saved. And I just felt the Lord minister to me yesterday and I was able to regain back my rest in God and that assurance of his love.

We had a great service today, Joseph taught the first session on Discipleship, and I taught the second session on body ministry from Ephesians chapter 4, and also how to relate with one another in the body of christ. 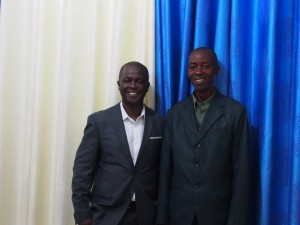 We had a great time last week with pastors Zadok and Francis coming over to Nairobi. 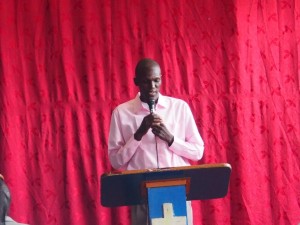 I spent a lot of time with pastor Zadock, starting from our meeting in pastor Rob’s house, and later in my house and  in some other meetings. It was my first time to have such an ample time with him; though we meet in the pastor’s conference, this was special. He loves the Lord, is very serious in the things of God, and he had a chance to preach in the Kwa Njenga Church. He brought a good word on reaching out to the lost; later in that day we had a deacons’ meeting together with the captains and he was able to see that part of having a leadership group that bears the burden of the ministry with the pastor. 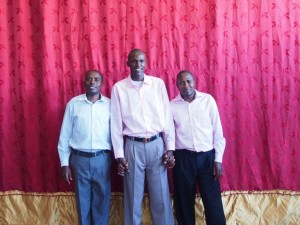 He also shared very good things of what has happened to the flock that he shepherds in Usenge. Some of it was from the last year’s conference in raising the standards and requiring obedience to God’s Word. He shared how much growth has come upon the flock there. Another thing we sensed was the benefit of the ministry that has come to Zadock  through Pastor Rob’s visits and how close that Zadok feels he is to the ministry, it has had a great impact on him. He also attended the young adults’ meeting before he left. I saw there would be great benefits if the pastors’ relationships and friendships  were strong other than having just a formal relationship.

I have also had a chance to visit Sammy of Kwa Njiku. I arrived in his house at 8 pm, and we had good fellowship with him, plus his deacon called Billy and his wife Jane. The deacon shared how he joined the fellowship with his wife and I shared how I also joined the fellowship. He and his wife are a great encouragement to Sammy. After they left, I was left with Sammy and his wife. It was a relaxed casual time, this was my first time to sit and share with Sammy’s wife. She seemed to me as one that loves the Lord, and had a very lively testimony on staying  alert and being watchful for the Lord’s return. She painfully shared how this generation of Christian has lost deepness in the things of God,  and unless the lord intervenes there is no hope for the next generation getting deep because all that they have seen is lukewarmness. Later we had a great time of praying together and they escorted me to the road @ 3 am, for I was to travel with the first bus to Nairobi.

We have started a new disciples’ class. It is a class we usually start based on need when we have a number of new disciples that have joined us. The class helps to establish them in the faith and even where their questions can be answered.

The deacons are doing  well; we will in the near future need another deacon because the flock is growing and and it will take more than 2 deacons to serve so that no one is neglected.

Peace be with you,
Peter Gichuki