Our Nakuru church has now moved to its new location. In our last post, we shared with you about our need to move and how we began taking down at our previous location.

On Easter Sunday afternoon, I went with a team of men from the Eldoret church to begin work on the new church building in Nakuru. 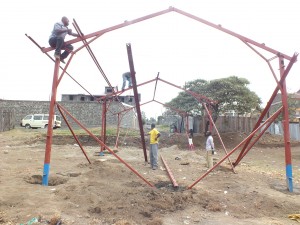 The building frame being erected.

Soren Pedersen, a missionary friend from Denmark, had built and erected the basic structure. His company, Mechai International, builds these for churches all over Kenya and South Sudan. He has built a number of buildings for Calvary Temple, including Eldoret, Murumba, Butula, and now Nakuru. 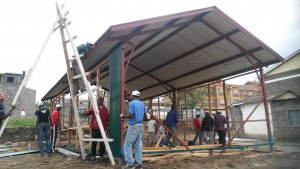 The framing and first installation of the mabati walls.

We were going be in Nakuru to frame the walls and install windows and doors. We arrived Sunday evening and began early Monday morning. Some of the men began to dig along the foundation (so that the mabati could be aligned at the bottom of the building), some began piecing the wood timbers together, and some began to apply a water/insect proofing solution to the lower pieces of wood. Once these things were done, we began the framing process. Some men ran the horizontal runners, while others installed the windows.

I can’t say enough about the men that we took with us from Eldoret. They took their holiday to go with us and minister to the church in Nakuru. It was a great time of fellowship and a real boost to our brothers and sisters there.

Though we worked hard and got much accomplished, we only finished about half of the work. Pastors George and Joseph of Nakuru have been working on the building since we left. When it is completed, we will post pictures on this blog. 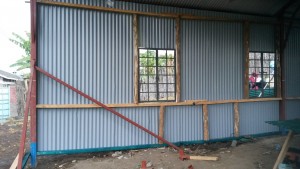 Please continue to pray for our church in Nakuru. They are situated in a very good location, surrounded by many people and a lot of needs. We believe that the harvest is great, and that the Lord has a remnant that He wants us to reach in this city.