A couple of weeks ago, Mildred and I traveled to one of our churches in the Lake Victoria region. It’s about an eight hour trip from Nairobi.  Zadok is the pastor of the church in Usenge.  This region is known for its perversion and promiscuity. It has one of if not the highest rate of HIV deaths in the world. We have several churches in this region.  We stopped in Bondo on the way and had a couple of hours with Pastor Chiagi and some of the members of his church where we were warmly received and given a meal before heading on to Usenge.

It was my first time to visit any of our churches in this region. In doing so, there was an awareness of the many years of ministry that Tony and Karen had sown into these churches.  We were blessed in our time with Pastor Zadok and his flock. The people were hungry and expectant.  Our first service was on Friday night and we started about 9:45, which is not unusual over here. The church was full and I shared on the hunger for the presence of God and the cost required.  It was a great time and even as we were closing the service there were people still coming into the church.

On Saturday morning we invited the pastors and their wives from our other churches in that area to come for time of fellowship.  This is probably the strongest region where the pastors have close relationships with one another and meet together on a regular basis.  There were some good testimonies from the pastors’ conference and the impact on their marriages.  One in particular was Pastor Moses and his wife. They shared that God had done a miracle in their marriage.  They had been married for 41 years and the marriage was dead. The wife shared that she had been thinking about leaving her husband, that’s how bad it had gotten. They both shared what the Lord had done in bringing life and love back into their marriage.

Pastor Solomon was there also with his wife. It had just spent a few weeks since the murder of their son in Sudan and the challenges that the wife was going through with cerebral malaria.  Both were doing well and giving glory to God.  His wife was the best that I have ever seen.  She seemed very much in her right mind and seemed much at peace.  She also shared some good things.

In our meeting with the pastors I encourage them in continuing to build strong relationships with one another emphasizing that we are not a denomination and that our strength is in our friendships, being able to help one another in the challenges and trials that we as pastors face. We also talked about not allowing the culture or tradition to make the word of God of no effect.  We also talked about Galatians 6:1 in restoring those overtaken in our churches in a spirit of meekness and not harshness.

Pastor Rob and Mildred Hendrickson with the Usenge Church 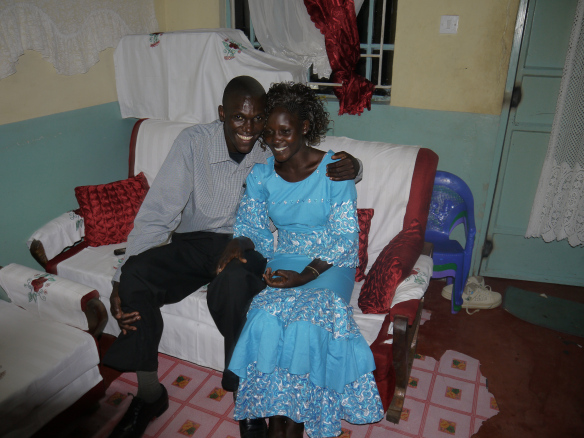 Pastor Zakok and his wife Lillian

Later in the day, we had another service with a good response from the congregation.  After the service we were able to have some good time with Zadok and his wife Lillian.  Zadok is one of our younger pastors but a good representation of who we are as a ministry.  He has a strong marriage and it is evident of their love for one another.  Tony was a big help in getting the church started in Usenge but for the first year they only had three members, two of them being Zadok and his wife. The area pastors persecuted them and told them they should leave.  The next year Tony came and held some meetings and out of those meetings ended up with 10 members.

In our Sunday morning service we had about 80 adults and youth and 70 children.  It was just Mildred and her sister Ruth taking care of all the children but they said they were well behaved.  I taught on the love of God and our lives on the altar. It was a good time with a good response from the people.

Zadok’s wife later testified of what the Lord had done her husband’s life. Before we came, Zadok had been discouraged for many days to where he wasn’t eating. She shared how he had been a changed man since our arrival with his hands being lifted up.